Engelhard, founded in 1902 in New Jersey, is among the most renowned precious metal mints. Throughout the twentieth century, mergers and acquisitions grew the Engelhard Corporation into one of the world’s largest refiners of gold, platinum, and silver, as well as expanding its reach into other chemical and mineral-related industries. Engelhard was purchased by BASF, a German company, in 2006.

While Engelhard minted silver bars in 1, 10, and 100 troy ounces, their only silver rounds weigh one troy ounce. Each is .999 pure silver, measures 39mm in diameter, and is dated; they were minted between 1982 and 1987. Engelhard silver rounds are known as the “American Prospector.” Each depicts a prospector kneeling on the ground, panning for gold. The same design was used for gold rounds; thus it features a gold prospector rather than a silver-themed design, which many new investors find to be confusing. Early Engelhard rounds feature a globe logo on the reverse, while 1984 and later issues feature an eagle design in its place. 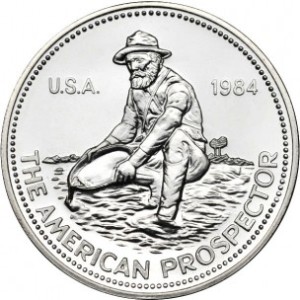 Because Engelhard silver rounds have been out of production for more than two decades, they are no longer available directly from the mint. Instead, they can only be purchased by third-party sellers such as coin dealers.

Engelhard silver rounds are getting harder to find, which has pushed the price higher than that of recently-minted silver rounds from other producers. For the best deals, turn to online sellers, who often offer the lowest prices on Engelhard silver rounds. Still, expect to pay more for these high-quality rounds than for rounds minted by other companies; Engelhard rounds carry a high premium as a result of their reputation and scarcity. Often, they are among the highest-priced silver rounds available to silver investors.

Remember that all Engelhard silver rounds are now more than two decades old. As a result, many will show wear such as tarnishing or scratches, regardless of how carefully they have been stored over the years. If eye appeal is an important factor for you, carefully examine the information and photos available before investing in Engelhard silver rounds.